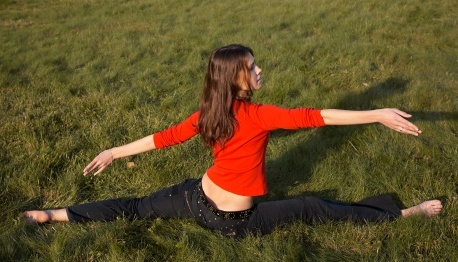 I’m all about cheating death. And since we can’t all seduce pale, sparkly, bed-headed men (sorry, R-Pat), some of us have to go about it the natural way.

You might recall when we sniffed out the longevity benefits of water, green tea, and sundry antioxidants. Then there were resveratrol and chocolate.

Well, now I’ve moved on to a new death-cheat: Yoga.

Yoga’s potential longevity benefits first occurred to me when I read an article about a centenarian in Salt Lake City. (When 103-year-olds start dishing on their fitness secrets, let me tell you, I listen.)

In this article, the spry old woman attributed her health to just three things: a healthy breakfast (cold cereal with blueberries), dancing barefoot and doing yoga.

She didn’t say why yoga was such a boon to her health and wellbeing, leaving me to figure it out for myself. Here’s what I came up with…

Getting bendy (and then some).

First off, here’s what I know about yoga: It’s about more than flexibility, and it’s not just for girls. Everyone can reap the physical benefits: improved balance, endurance, strength and flexibility. And for the mind, it promotes concentration and relaxation.

Now, it’s no secret that getting fit will change your life. (At least, it shouldn’t be; we talk about it all the time around here.)

But what does fitness have to do with living longer? And why yoga, specifically?

An article on WebMD holds some clues. It says that a combined lack of physical activity and poor nutrition is the second greatest underlying cause of death in the U.S. (right behind smoking). Regular exercise helps the body ward off cancer, heart disease, diabetes and other diseases, and it indirectly boosts physical health by improving mental health.

As for why yoga’s so potent? WebMD identifies four exercise components necessary to preserve health—and yoga takes care of three of them for you (four, if you do certain types):

Another WebMD article says that by quieting the mind, the body will often work to heal itself. Which brings us to the next life-lengthening benefit of yoga…

Some people are turned off by the mental aspect of yoga. Those people are probably going to die early. You can’t escape the mind-body connection.

Tara Stiles, personal yoga instructor to Deepak Chopra, says she does it because it keeps her grounded and centered. That, in turn, is probably what keeps her model-hot.

The rest of us? We’re aging rapidly.

I don’t know a single person who isn’t perma-stressed—which is sad, because according to Men’s Health, I live in the sixth calmest city in the U.S. But numerous studies have shown that stress, chronic stress especially, inhibits cell renewal in the body. Sadly, stress ages women even faster. (Ahem: not an excuse to roll up your yoga mat, gents.)

You can’t erase stressors with the wave of a hand. But you can erase stress. That’s because stress isn’t caused by stressors, but by our reaction to them. And just about every yoga-practicer in the world will tell you: yoga helps you keep life in perspective.

The sage, spry Utah centenarian says she does the kind of yoga that “stretches your mind.” She’s buried two husbands in her lifetime and is the last survivor in her family, yet she remains grounded and centered. She talks about her ability to enjoy what she has, and let things go when it’s time.

There’s no question that this is what’s kept her healthy and happy for 103 years—and counting.

So pour yourself a bowl of cereal, toss off your shoes and get to stretchin’.