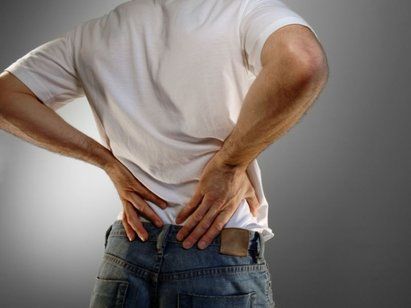 Why Does Cycling Hurt Your Lower Back?

Mankind really hit a home run with the invention of the bicycle.  You don’t have to look much further than Wikipedia to discover that the bike is the most efficient means of self-propelled transportation available to humans.  Unfortunately, the bike is also pretty good at producing lower back pain.

As a competitive bike racer and a chiropractor, I have a pretty good understanding of what goes wrong in the lower back when cycling and some of the steps a cyclist can take to combat this common problem.

Let’s start with how a bike compromises the low back.

It’s All In The Prolonged Flexion

It doesn’t take very many observation skills to see that cyclists spend their exercise time all bent over.  While this posture is essential in the world of “efficiency” (think wind resistance,) it can be disastrous on the low back.

When most people hear mention of the spine, they think of phrases like “pinched” nerves, “slipped” discs, “pulled” muscles, or something “out of place”.  None of these explanations for why their low back is hurting is complete in and of itself (the human spine is far too complex to be reduced to a singular etiology,) but I suppose more thought has been put into it than just saying that their “backbone” hurts.

You don’t have to look much further than recumbent bikes and recumbent bike trainers to gather further evidence that the prolonged flexion of the low back on a conventional bike is largely the culprit in cycling-related low back pain.

Many recumbent riders attribute the relief they get when riding a recumbent bike to the “support” they’re getting for their back, but that’s only part of the truth.  If you look at a recumbent rider’s horizontal position and then rotate them vertically, you’ll see that they aren’t bent over at the waist; they’re essentially exercising as if they were standing up (while laying on their back.)

Now look at a rider on a conventional bike, particularly the crazy riders (guilty as charged) who get into a time-trialing position. What you’ll see is a sport performed at extreme effort while bending at the waist as close to 90 degrees as possible.

So What’s So Bad About Bending At The Waist?

To satisfy the chiropractor in me, I’ll touch on the fact that prolonged flexion compresses the elements on the front of the spine (front part of the disc) and pulls on the back parts of the spine (facet joints, multifidus muscles,) as well as the ligaments between the spinous processes.  Any of these problems can be the source of a lot of pain.

But, there’s something else involved here:  tight and contracted hip flexors.

When you think about what cyclists ask their legs to do within a very limited range of motion, it’s amazing that the bicycle is number one in the human-powered machine contest.  Over and over, the legs (specifically the hip flexors, called the psoas muscles) contract while near the limits of their shortest configuration.

Over time, the chief hip flexor muscle (the psoas) gets progressively shorter and tighter.

A short, tight muscle is prone to spasm (can you say ‘charley-horse’?) but in the case of the psoas muscle there is a unique ability to cause trouble.  Namely, the muscle spans two very important joints.

The origin of the psoas muscle looks like a fan, attaching itself to the sides of the last five vertebrae in the spine.  From there it heads south, across the sacroiliac (hip) joint and inserts onto the femur (thigh bone), spanning the joint where the femur attaches to the pelvis at the cup-shaped acetabulum.  When the psoas muscle contracts, the thigh comes up, and this is called hip flexion.

At the time I’m writing this article, there’s a phenomenon that’s sweeping the nation…Tebowing.

After throwing for or running for a touchdown, the Denver Broncos quarterback, Tim Tebow, gets down on one knee to thank God, and some people have taken to imitating this pose in very unusual settings. It may seem like a silly thing to do, but these imitators are actually benefiting by stretching their psoas muscles. I doubt the craze will last very long, but Tebowing is actually a very effective stretch for the psoas muscle.

All a cyclist has to do is get down on one knee, and then— keeping the lower back as straight as possible— rock forward.  A deep pulling on the front of the hip indicates the correct stretching of this obscure muscle.

Work at keeping your psoas from getting progressively shorter over time and your cycling will be as pain-free as possible.  Now if someone could just come up with a bike saddle as comfortable as an Easy-Boy recliner…

About the author:  Dr. Ron Fritzke is a Chiropractor in Mount Shasta, California, serving on the sports medicine team at the College of the Siskiyous.  He spends untold hours riding his bike and writing bike trainer reviews on trainers, like the Road Machine trainer.