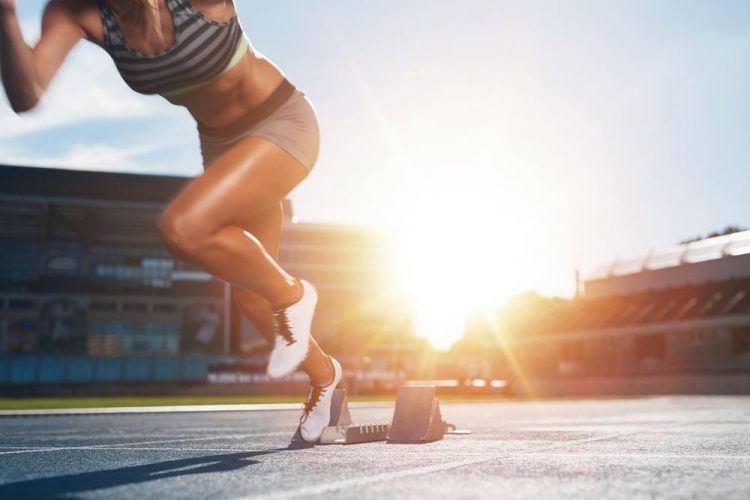 Ever tried to show off for someone at the gym?

Don’t worry, I have too. I think we all have. Maybe it’s the cutie on the treadmill or the hottie foam rolling close by, but we’ve all fallen victim to going a little harder because of a good looking onlooker.

It happened to me just the other day.

I got butterflies, my heart fluttered, I felt my face go red, but I tried to play it cool.

I’ve worked in gyms for years. I’ve seen more than my fair share of gorgeous people in flattering cutoffs and yoga pants. But this was next level. You see, it wasn’t just any old gym rat. It was Apollo Creed. Apollo Freaking Creed.

The man, the myth, and the legend that trained Rocky Balboa was staring right at me. (I mean, he was on a stationary bike and I was in front of him. He wasn’t staring, but I was right in front of him.)

I had to perform my best.

The last thing I wanted was to have Apollo Creed come over after my set and tell me I didn’t have the eye of the tiger. Unless, of course, he’d also take me under his wing, train me, and we’d made a classic 80’S training montage. You know the kind I’m talking about—a montage complete with cheesy pump up jams and sprinting together on the beach like best bros.

Alas, he didn’t say anything. Honestly, I don’t even know if he was actually looking when I pushed extra hard on my sets. But I’m glad he was there, because he helped me take my performance to the next level.

And now I want to pay it forward. I’m going to tell you the best bodyweight exercise to help take your performance to the next level. But first, let’s talk about performance.

Separate and Not So Equal

Not all athletic performance was created equally. There are three main types of energy systems and each lends itself to a different type of performance:

Each energy system helps your body perform. But each system is different. For one, they’re used for different types of performance. Also, each system utilizes different energy substrates (read: fuel) to keep you performing at your peak.

It stands for adenosine triphosphate phosocreatine. (Thank goodness for the acronym, right?) This energy system is all about creating high levels of adenosine triphosphate (ATP), which gives your body the energy it needs to perform short bouts of intense exertion. We’re talking maximal effort, here—things like lifting heavy, sprinting hard, playing football, or chasing down the ice cream truck).

ATP is the energy currency of life. The more intense the exercise, the more ATP we need to do it. The ATP-PC system creates high amounts of ATP, but there’s a catch…

Bazooka Bubble Gum and the ATP-PC system have something in common—they both last about 10 seconds.

Why? For the gum, I have no clue. For the ATP-PC system, I got you covered. The energy substrates used by this system are ATP and phosphocreatine stores. Through different reactions, these are used to create high amounts of ATP for the body to use (about 11 mmol of ATP per second). But ATP and phosphocreatine are stored in very small quantities.

Once those stores run out—usually around 10 to 12 seconds of maximal effort—the ATP-PC system must recover. That’s when Anaerobic Glycolysis becomes the main source of energy production.

Pro tip: Increase phosphocreatine stores by taking a creatine supplement. Saturating your cells with creatine and you’ll improve your performance during short bouts of intense exercise. Doesn’t matter if you’re in the gym or on the football field, creatine can make all the difference. Take it and you’ll have what you need to squeeze out that last rep or bust a play wide open with breakaway speed.

Roughly 10 seconds into intense exercise, the ATP-PC system begins to fatigue. From 10 to 30 seconds Anaerobic Glycolysis begins to pull a Samwise and offers to share the load. When the duration of the activity is around 30 seconds to 2 minutes, it’s your body’s main source for energy production.

Running one 400-meter lap around the track is a simple example of an activity that uses Anaerobic Glycolysis.

The rate at which your body produces lactic acid depends on the intensity of the exercise. Eventually, you’ll reach what’s called an anaerobic threshold or lactate threshold—the point when lactic acid builds up faster than your body can handle.

That’s when the body shifts from Anaerobic Glycolysis to aerobic energy systems to sustain energy production.

Aerobic simply means that the system uses oxygen. There are a few different types  of aerobic energy systems—Aerobic Glycolysis, The Krebs Cycle, and The Electron Transport System. Each is similar in that it involves a lower rate of energy production over a longer period of time.

These systems are the wheelhouse of endurance athletes. They’re the primary energy source for everything from running a mile to ultramarathons. Also, they’re used during rest, which is important to note. Aerobic systems help you recover during rest periods between bouts of high-intensity work. (Think of things like rest between sets or time between plays in football.)

As the main energy sources for low-intensity steady state exercise, aerobic systems aren’t associated with a specific fatigue point like the ATP-PC system or Anaerobic Glycolysis.

It’s is the king of bodyweight exercises—fantastic for fat loss, developing speed, and building powerful legs. Squats, pull ups, push ups, and planks are all great, but nothing else gives you as much bang for your buck as a great sprint workout.

When it comes to improving all around performance, sprints are great. During a proper sprint workout, you’ll use each of the major energy systems:

There’s a problem, though…

I want sprints to help you perform better, not land you with the physical therapist. So I created this sprint workout to help you hit the ground running with your sprints. (Yes, I’m well aware that pun was terrible. But I couldn’t help it.)

Seriously, though, if you’re ready to boost your athletic performance and lose fat while feeling great and looking even better, you need to start sprinting.

For this sprint workout, use 20 to 40 yards. More important than distance is the level of intensity. Even an experienced sprinter can get a great workout with 20 yards. If you can’t maintain your intensity during the entire sprint, make it shorter. Find a distance that’s going to work best for you.

Warm up (do NOT skip the warm up):

* If you’re a beginner, start with one working set at 85% effort. As you become more experienced with sprinting, either increase intensity, working sets, or both.

Note: The key here is to maintain intensity during the entire sprint. If you notice you’re running out of steam before the end of your sprint, adjust the distance, intensity, working sets, or even rest periods accordingly.