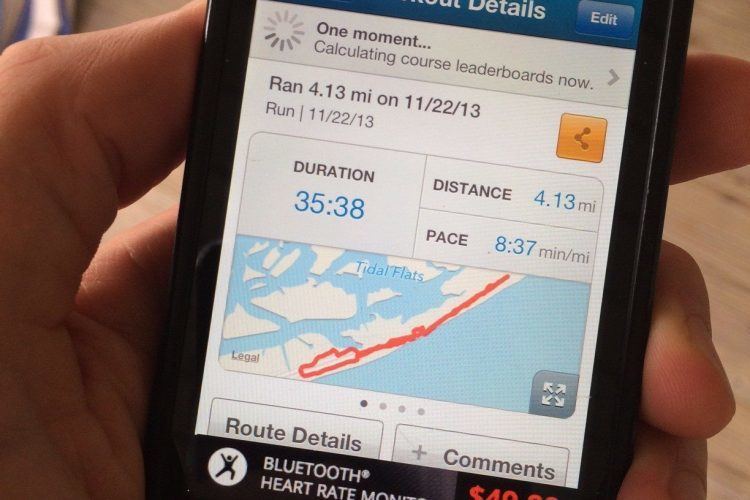 It Starts with Baby Steps: How Tech Can Help

The beauty of running lies in its simplicity, right? But I have a confession to make. I can’t run without technology (at least, not as far).

Maybe it’s my competitive spirit, but knowing how far I’ve gone and how fast I’m going gives me motivation to press on. When I try to run without my smartphone or mileage watch, everything just starts to hurt that much faster.

This problem goes back several years. But it’s actually a blessing, because before I had the ability to accurately track my miles and pace, I simply couldn’t run at all!

Laziness or Lack of Equipment?

I’m 32-years-old now, and I’ve been a runner for four years. Throughout my 20s, I’d go through phases where my lack of energy started to bother me. Eventually, I’d put on my ratty old shoes and head out the door. About a block later, I’d turn around, catch my breath and head back to the couch.

It just seemed too hard, and I wasn’t overweight, so why bother?

Then one day, feeling a bit more serious than ever before, I went online and ordered a Garmin Forerunner watch.

When it arrived, I strapped it on and headed out, determined to run one mile.

I know, I know. One mile isn’t much. But at that point, I had not run a mile in nearly a decade. I huffed. I puffed. But I made it, egged on by the numbers ticking away on my wrist.

Days later, once my legs had forgiven me, I set out to do it again. But when I reached a mile, I pushed myself to 1.1.

Can you see where this is going?

By gradually increasing my goals by the tiniest amount, anything less than 4 miles today feels like I haven’t even tried.

My next breakthrough came after running in my first 5K. A friend pointed out that the winner was a ‘toe striker.’ I didn’t understand the term, so she referred me to the book Born to Run by Christopher McDougall, which explores the Tarahumara technique of running barefoot, striking the ground with the front of the food and springing back up without sending impact up the legs.

Believe me, the learning curve started all over again. After one mile of two striking, I couldn’t walk for three days because my calves were so sore. But as I again built strength, I discovered that with this new method I could carry on even farther before growing fatigued.

I soon bought my first pair of barefoot shoes, and I now wear through a pair every several months — they take a beating, but I work them hard! Last spring, after one year of ‘barefooting,’ I competed in a 200-mile relay race, holding down 17 miles over a 20 hour period.

I’d come a long way from barely making it around the block.

The Latest Tools of the Trade

I like to keep my gear pretty simple. These days, I rarely use my watch anymore, although options from Garmin, Nike and others have become far more affordable. I’m content to use the apps on my iPhone, allowing me to carry my music and mileage/pace monitor in one device.

For shoes, I like to alternate between pairs. Quality choices include Merrill Trailrunners (perfect for non-road terrain) and Nike’s Free line, which offer a bit more cushioning for road running while still allowing for barefoot technique.

Inspired yet? Here are some of the latest options that I recommend:

RunKeeper Pro ñ This app tells you what you need to know in one screen, including distance, pace, speed and calories burned. It’s easy and there’s no learning curve, but it does cost $9.99.

MapMyRun ñ Still the standard bearer for free running apps, this app gives mileage and pace, as well as storing and tracking your runs in a database so you can watch your progress online over time, but without paying for the $4.99 upgrade you will have to listen to a quick ad after each mile.

Nike + SportWatch GPS ñ Arguably the best value in its class, this simple and attractive watch keeps your distance and speed right there on your wrist, so there’s no excuse to stop until you reach your goal.

Garmin Forerunner 410 ñ This is the one that started things for me, and it’s gotten more affordable since I bought it, although it’s still not cheap. With everything from a stopwatch to storing historical data, it’s a quality item that can literally change your life!

Do you have a similar story about how the ability to track your miles and progress helped you start a fitness regimen and stick with it?

Stratton Lawrence is an outdoors and fitness enthusiast, as well as a freelance writer and editor. Stratton covers fitness gear, running, outdoor, and travel related guides for eBay.