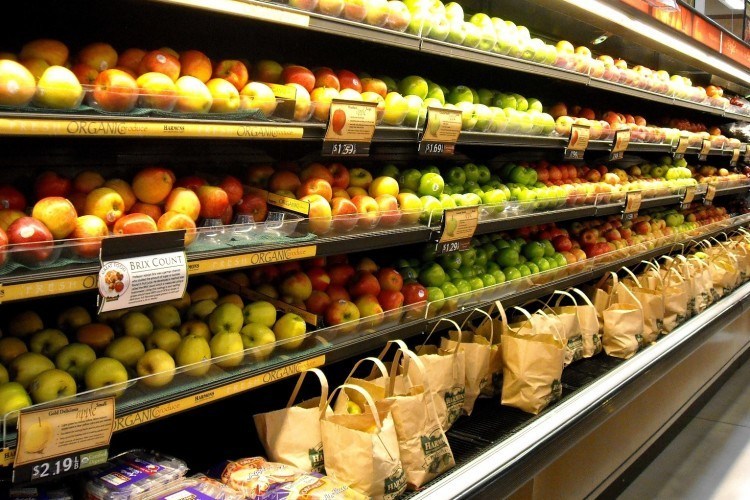 Unlike Ryan, I hate grocery shopping. It’s not that I hate food. Rather, I get sidetracked and confused amidst all the brimming shelves. I never seem to come out with the healthiest food choices in my basket.

But, as part of my campaign to end the food fight, it was time to make peace with grocery shopping. So I’ve put together a guide to help me— and anyone else who hates food shopping— come out with the good stuff. It’ll now be easy to tackle this healthy grocery shopping business.

Rule #1: Don’t Dump Organic Just to Avoid Being One of “Those People”

I always thought “organic” was a marketing gimmick—just another label thought up to make us spend more money for the same thing. And I laughed at all the yuppies who were falling for it.

In some cases, I could have been right. But according to Rachel Cromidas, food manufacturers do go through a rigorous process to get certified.

So what’s the value of food that has been produced and processed organically, or that has been made with at least 70% organic ingredients? “Organic farming systems rely on ecologically based practices,” USDA explains, “such as cultural and biological pest management, exclusion of all synthetic chemicals, antibiotics, and hormones in crop and livestock production.” In other words, you eat less weird crap.

Michael Pollan says food manufacturers get a kick out of turning attacks into “new ways to sell slightly different versions of the same processed foods.” If you can recall an ad for the product— even if it was touting a healthy new attribute (Low Fat! HFCS-Free!)— it’s probably still crap, and you should probably put it back.

Having a cheat sheet will also help you recognize friendly names for unfriendly ingredients.

Rule #3: Own the Produce Section

I shop at Harmon’s, a local grocery store chain in Utah, and to their credit, they are trying to make healthy shopping easier: their frozen food section is a senseless maze at the far corner of the store, while the produce section is filled with employees offering helpful advice and, more importantly, tons of healthy samples.

On a recent trip to the Harmon’s produce section, they were handing out samples of Kalamata olives, lemon-infused olive oil with fresh-baked bread, and guacamole made from scratch right before my eyes (not to brag or anything.)

While some grocery stores make it easy to set up camp among the fruits and veggies, which is right where we should be, not all stores do.

That’s why I came up with the next rule.

Some people, like those who “lunch” at Costco on Saturday afternoons, enjoy the flurry of processed food samples— and then get suckered into buying them.

The foods Costco offers as samples are almost always the unhealthiest foods in the store. While I’m a strong advocate of picking up a square inch of frozen pot sticker, ravioli, sausage, or cream puff, I suggest you think twice about buying.

No guilt trips. Don’t even stick around for the spiel. Sample and bolt.

Rule #5: If You Can Make It from Scratch Just As Easily, Do It

Remember when Eric Schlosser told us in Fast Food Nation

that everything we taste and smell in fast food is manufactured in a chemical plant?

Well, you’ve said goodbye to fast food: now you’re at the grocery store. You’ve come this far. Now go all the way and insist upon your right to enjoy real food.

When Eggo tries to sell you mixed-berry granola pizza as a convenient, healthy alternative to its nutrition-less waffles, rebel. Yeah, it might be kind of healthy (doubt it), but in the time it would take you to nuke this strange oat-topped sponge, you could make a fresh one.

When season and location permit, skip the grocery store altogether and head to the farmer’s market. Even though most grocery stores now carry organic products, the manufacturers tend to produce organically for the purpose of boosting sales with our health as a mere byproduct.

Meanwhile, smaller farms are producing organic food in your neighborhood, but perhaps haven’t been able to foot the bill or sludge through the paperwork to get “certified.”

When you buy from local growers and producers, you can ask them directly about how they produce the food. And chances are you’ll get even greater health benefits because your fruits, veggies and meats haven’t lost nutrients traveling halfway across the country.