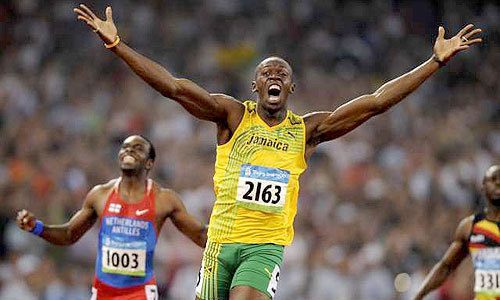 As a former fat guy I’ve always wanted to be able to run faster. I’ve caught myself daydreaming that I was taking the blocks next to Usain Bolt or Michael

Johnson and just blowing them off the line. You’ve envisioned it too, your legs wind up Road Runner style and you leave everybody in a cloud of dust standing on the starting line. Meep Meep.

The reality is that I probably would have been happy finishing the “fun run” in the top half of my college P.E. class, but a guy can dream right?

While drumming up ideas for this post I figured if we were going to learn how to run faster, we should probably learn from the fastest man in the world, Usain Bolt.

Without question Usain Bolt is the fastest man in the world. He set the world record in the 100 and 200 meter races in the Berlin World Championships in 2009. He recorded times of 9.58 seconds and 19.19 seconds respectively. Just to give you an idea of how fast that really is, that’s approximately a 2 minute and 50 second mile time considering he could sustain that pace. That’s over 2o miles per hour!

Now you may not have control over where you’re born or whether or not you’re of West African descent, but there are some Jamaican cultural elements that you can incorporate into your way of living.

I’m not talking about going all Bob Marley either RastaMan.

In Jamaican culture, sprinting is football. For the country of Jamaica a premier track meet is basically the equivalent of the Super Bowl here in the United States. The most talented student athletes become track stars not quarterbacks. Train as though you want to be the best runner in Jamaica.

Jamaica also has some very rigorous and advanced training plans, especially for such a small country. If your goal is a 5K, or even a marathon, there are guides all over the net on how to improve your time in any race.

Most importantly never underestimate the power of dreadlocks.

Believe it or not AskFitnessCoach isn’t the only resource out there for learning to run faster, eat better, and lose weight (shocking I know). In fact, when you’re looking to improve performance or tighten up your waistline, it may be a good idea to get 1 on 1 help from someone who knows what they’re doing. When asked about going even faster Bolt had the following to say:

“I think I can go faster, but I leave that up to my coach,” Bolt told the AP Aug. 30 [2009]. “We analyze each race. We try to go through the season without risking getting injured. We see what we can do to go further.”

There are definitely times when getting the advice of someone with more experience is a really good idea.

Even with all that speed at his disposal he’ll never perform to the best of his ability if he’s simply racing to beat everyone else. A good example of this took place on Saturday when Bolt ran a 9.97 100m and was defeated by Tyson Gay who ran a 9.84. Losing by 13 hundredths of a second in the 100 meter is basically the same as being ten run ruled in a baseball game.

When asked about the race in this interview, Tyson Gay said Bolt’s “only goal this year was to go undefeated.”

If that’s true, Bolt beat himself on Saturday. The only way that we can truly improve is to use our own past performance as a measure. Don’t focus on what the people around you are doing, never look over your shoulder, do your best.