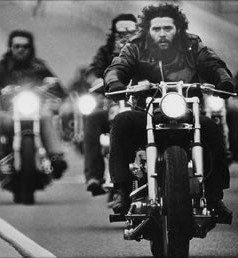 Sometimes you gotta make a choice: go broke, get shamed, or get fit…

In August 2008, I set a performance goal: to become a better cyclist. You know, the chammy-wearing, clipping-in, pedal-uphill-without-tears type.

I bought a bike. I bought some gear. I installed a computer on the fork. And I logged 0 miles on it.

By March 2010 (almost two years later), I had started cycling leisurely. I was doing the old neighborhood loop, weaving and wobbling up Camp Williams Road. Passing cyclists often slowed to ask if I was OK.

I really wanted to be a better rider, so how was I going to stop spinning my wheels? (You knew that was coming)

Performance goals are a wonderful way to create structure and focus in your fitness program — unless you’re a quitter.

For added accountability, some enlist the help of a support network. That’s a nice little push, but let’s be honest: you don’t stand to lose much if you blow it. Just turn off your phone, close the blinds, and find a new set of friends.

And don’t get smug: I’m not the only one with a follow-through problem. Apparently 88% of people drop their New Year’s Resolutions. Most don’t even really believe they’re going to start them in the first place.

Only 12% of us accomplish our New Year’s goals.

When are we going to start achieving our goals?

For “prolonged planners” like us, it doesn’t matter how much we want to achieve something; it will never be enough to envision the goal, pencil in a deadline and round up some pals.

I knew there was only one way to focus and get myself out of planning mode (or the hammock in the backyard).

Not a reward if I achieved my goal, but punishment if I didn’t.

So I registered for the Little Red Riding Hood ride, one of the biggest women-only rides in the country. There was no backing out. It was an inflexible deadline and I paid $55 to enter.

There was also the prospect of extreme humiliation in front of 2,999 cyclists if I blew it. (I think you’ll agree that a pack of head-to-toe jerseyed cyclists can be more intimidating than Hells Angels.)

It was instant ambition.

OK, it wasn’t “instant” ambition. Post-registration, I drafted a training schedule and promptly shelved it. I had plenty of time to get started. I went on vacation instead.

I started training in April, adjusting my training schedule so that I now had to add 10 miles to my ride each week. Still seemed doable. But after my first few rides, I started panicking: I had two months to be in 60-mile shape, and 10-15 miles felt like a workout.

In May, there was more panic, and a bit of throwing up. I got a three-week mystery plague that my doctor could do nothing but shrug his shoulders at. My asthma/allergies/lung infection/sinus infection made it difficult to ride.

At this point people offered to buy my Little Red ticket. But, though I may be lazy sometimes, I’m also proud. I didn’t want my friends and family to think I was a loser. I was going to do that 60-mile ride or (more likely) die trying.

I had planned to announce that I rocked my training schedule and sailed through 60 miles of Lewiston farmland like a pro. In fact, in March, I had already begun writing the success story post in my head. As you can see, that didn’t happen. Instead I’m announcing that I did the ride and didn’t die, and that feels like an incredible achievement to me.

I would not have gone through with the ride if it had been easy to back out. I also saw a part of my state that I never, ever would have thought to visit, and it was beautiful. (Watch out, century ride 2011!)

Go Broke, Get Shamed, or Get Fit

I know of an author who puts $1,000 into a savings account and if he doesn’t write his book by the deadline, the money gets automatically donated to charity. In this case, if you fail, it’s for a good cause. But you’re out a thousand bucks.

Don’t have that kind of money? You could enter a competition, or tell the world you’ll grill a snail and eat it if you fail. Or do what I did: sign up for a ride with a bunch of better cyclists and dive in.

So, do you want to run a marathon?

Actually start working toward your New Year’s Resolution, if you can remember what it is?

Then take my advice.

Put the performance goals and cheerleaders aside — it’s time to raise the stakes.