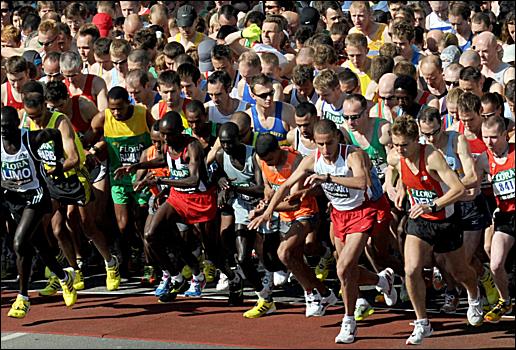 Does carbo-loading for marathons work? I asked sports nutrition gurus and scoured dozens of (ahem, rather dry) studies from research institutions around the world.

Sure it works. Sometimes. Unless you do it wrong. Or you’re a woman.

A brief history of carbo-loading

Carbo-loading has been a popular way to fuel for marathons, metric century bike rides and other endurance events since the 1950s.

Studies have found that the muscles are capable of stockpiling carbohydrate, or glycogen, is excess.

Many studies have also found that a carb surplus (what the big kids call “increased starting muscle glycogen”) can help stave off fatigue for those 4- or 5-hour treks to the finish line.

Today, athletes swear by it, trainers tout it and research institutions back it up. But I’m not totally sold.

Why? Of the 25-odd carbo-loading studies I read through which showed improved energy, few actually quantified the improvement. And those that did, well, they reported energy extension ranging from 20%, to a paltry 2-3%.

Which begs: even if carbo-loading techniques do boost glycogen storage—and, in turn, do improve endurance performance—is it enough to make it worth the trouble?

How is gobbling Pasta Carbonara trouble, you ask? Well, let’s take a look at what the classic carbo-loading regimen entails.

The standard carbo-loading method calls for total carb depletion before you load. It’s not enough to simply up your carb intake before a big event—before you get to touch that five-pound baked potato, you have to earn it with five days of turkey, beans and protein bars.

Carb-starving yourself induces the muscles to ‘thirst’ for glycogen and in turn store up more than it would otherwise hold, Charla McMillian (author of Boot Camp Abs) explains.

To drain glycogen stores, the classic method begins one week prior to race day with a rigorous workout. On days 2-4, you’ll taper training and eat a low carb diet (roughly 10% of your intake). On days 5-7, you’ll ratchet down your physical activity to a minimum and skyrocket your carb intake—all the way up to 90% of your diet.

Hey, you say. One highly-regimented week doesn’t sound too bad. But how do fatigue, irritability and a weakened immune system sound? According to Joel Maloof, a sports health scientist, even a short period of severe carb depletion can cause all of the above pre-race joys.

Well what if I told you that following the carbo-loading regimen to a ‘T’ is no guarantee it’ll work?

A glimpse of the studies

The Sports Science Institute of South Africa reported that carbo-loading can sustain an athlete’s energy by up to 20%. So for a 90-minute run, you could add 18 more minutes of energy.

The Australian Institute of Sport also found carbo-loading to be an effective way to boost endurance. The same study found that eating carbs immediately before, during and after a workout can also keep an athlete going for hours. Gee. Why not skip the carb rollercoaster and just munch on cereal and sandwiches all day?

And what about the ladies? Well, I’m glad you ask… because most researchers don’t. The majority of carbo-loading studies use only male participants. Meanwhile, women may be scarfing double the carbs with nothing to show for it.

Apparently carbo-loading in women is a whole ‘nother ballgame. McMaster University conducted two female carbo-loading studies and found that women simply can’t store as much muscle glycogen as men. In fact, in its first study, after a 4-day carbo-loading regimen female participants came away with no glycogen surplus at all. Zilch.

Women might be able to boost our carbo-loading threshold, Baylor University found, if we simultaneously double up on calories. But wait. Does this open up the possibility that the energy boost some female athletes see “with carbo-loading” could actually be influenced by other factors—like eating more calories?

And then there was the University of Helsinki study. It concluded flat-out that carbo-loading doesn’t always cause higher muscle glycogen stores. It’s a crapshoot. (Side note: this was an all-male test group.)

If you’re itching to add a few more minutes to your next bike ride, you might give carbo-loading a try. But with results so iffy, and carb math that could make an engineer’s head spin (even with that handy-dandy carbo-loading calculator), then why bother?

Especially if there are simpler ways to keep your energy up—some of which still involve, thank goodness, a big bowl of fettuccini.