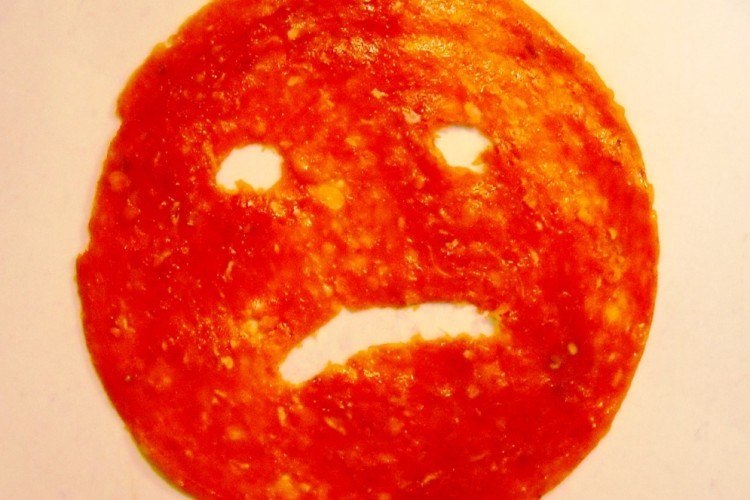 The other day I was served a sandwich with a large, rectangular slab of turkey.

Though my taste buds cowered, my curiosity was piqued. Rectangular deli meat? 4” x 6” turkey? What the **** is this?

So I ate the sandwich. Then I got to Googling. The results, as you can imagine, were disturbing. Even more disturbing than roast beef’s iridescent green sheen (which USDA says isn’t bad, but it’s still weird).

The following are a few things pre-sliced deli meat— or should I say, the silent killer in our lunch bags— would like to confess.

“I shouldn’t still be pink.”

Sodium nitrate is the reason you avoid hot dogs. But did you know it’s in most lunch meat? While researchers at University of Minnesota find that the nitrite used to cure meat isn’t necessarily carcinogenic, it’s still funky. After all, it’s used to preserve (and sometimes create) meat’s pink color, the university explains, as well as delay “off-odors and off-flavors during storage.”

“Yes, that could’ve been bone.”

Did you know that some lunch meat is a hodgepodge of animal? Again, that’s not just hot dogs. By way of a process that forces bone and attached meat though a sieve, edible meat paste is separated from the bone (we hope). And then, let me guess, it becomes 4” x 6” rectangles?

Unless the meat “recovery” process sounds appetizing to you, I suggest scanning lunch meat labels for “mechanically separated” (MSM) and “mechanically reclaimed” (MRM).

“I’m stuffed with hormones and antibiotics.”

As if being stuffed with preservatives and sundry carcass scrapings wasn’t bad enough, we also get to consume the hormones and antibiotics that were given to the animal. Skip all that by getting organic and grass-fed meat, Rachel Mount advises on Oprah.com. Grass-fed meat also contains more beneficial fat and less saturated fat. Worth the money, folks.

“I’ll probably give you diabetes (no hard feelings).”

Processed meat isn’t just linked to increased risk of heart disease. According to the Harvard School of Public Health, regular consumption of pre-sliced deli meat could put you at risk for type 2 diabetes as well. Their advice: no more bacon, hot dogs, sausages, salami, or processed deli meats. It’s not worth the risk.

“I’m going straight to your thighs.”

Prepackaged deli meat is often higher in fat than sliced-to-order meat. It also tends to have more preservatives and seasonings like gelatin, sodium, and MSG.

Don’t dash to the deli counter just yet, though: even meats sliced to order can be heavily seasoned. Grill the person behind the counter about which are the healthiest choice. Chicken and turkey are usually lower in saturated fat, and typically the less seasoning the better.

Should you get your meat at the deli counter?

In my opinion, you’re certainly better off with fresh-sliced instead of mish-mashed and vacuum-packed. At least you can watch it being sliced, so there’s no risk of bones having been smooshed in and sieved out of your turkey. But the best way to guarantee healthy sandwich slices is to buy meat whole and slice it up yourself.

Thankfully, going out for an Italian cold cut trio now and then won’t do you in, but if you’re packing a daily lunch with processed meats, your health could seriously be at risk. A few days a week, load your sandwich with these meaty alternatives instead: tomatoes, bell peppers, avocados, and eggplants. (Wait— you look gutsy. How about a watermelon sandwich?)

Even if it comes in a cute and convenient Gladware dish.